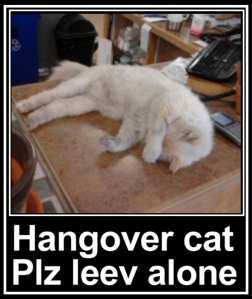 Have been having a jolly nice time away from the keyboard, only visiting the Interwebs twice yesterday. Have been introducing Mrs S to the delights of Sangria after a day and a half (Seriously, it was worse than shoe shopping) looking for and poking around garden centres for the ‘right’ pots and compost for our increasing family of Succulent plants, specifically Jade plants, and more generally three other species. Our Jade plant was looking a little bit sad, having out-grown the pot it inhabited. Sangria is quite nice, and does tend to slip down the old throat without much of a moral struggle. The cat in the picture can be considered a clue to my current physical state.

Notwithstanding, I really am developing a serious taste for Sushi. Out here on the Pacific rim we get the some really top notch stuff. Yet if anyone asked me as recently as ten years ago, if I would eat raw fish, I would have laughed in their face. Now I respond with enthusiasm. Sushi, sure. Great stuff. Pass the Soy sauce.

Am further amusing myself watching the local squirrels raiding the last of the figs off the tree outside my window. Our local Raven population are now so officially full of the crop that they can no longer fly. Or is that the sunshine? Because it’s on days like these that you could almost believe in man made global warming. Gorgeous weather. Although I hear it’s not so hot in the UK, where the traditional British Summer (1 day of sunshine, six rain and gloom) is in full swing. Do I sound smug? Well, just a bit. Over here in BC the weather is the exact opposite. Ten days of sun, a day and a half of rain. Rinse, repeat until October.

While I’ve been away I see a lot of otherwise sensible people have been getting highly excised about the death of a wild predator at the hands of an otherwise inoffensive Dentist (All North American dentists are fundamentally inoffensive, it’s a prerequisite of their profession) from Minnesota. All I have to say is; what are you people on? It’s not okay to make death threats against people you disagree with. You don’t like hunting that helps pay for game conservation? Tough. Now build a fkucing bridge and get over it FFS! As for some of the sad stereotypes that were being bandied around by people who should really know better; call yourselves freedom loving seekers of truth? Really? As for the anthropomorphism, giving an animal a human name does not change its nature. As anyone who has invaded the zoo enclosure of a predator species will understand. Once their wounds have healed, if, of course they are lucky enough to survive the experience. Even the brightest domestic pet is not human, it does not think like a human, it’s needs and priorities are not human. Anyone thinking that non humans are simply fur covered people is more barking than the Yorkshire Terrier our landlady periodically plays host to. Yappy bloody thing.

Well, that’s it for now. I’m off to get a new 64Gb MicroSD card for my Samsung plus a few other office bits and pieces we’ve identified a need for. So TTFN. Have a truly great day. Possibly.

Stalkers of taste and discretion