First spring lambs spotted on the hill overlooking our house this morning. New born twins. We’d talked to Colum when he came to collect the rent money on Sunday, and he reckoned that lambing wasn’t due to start for two to three weeks. The sheep it seems, have other ideas.

The Gardai are all busy chasing teenagers for chucking fireworks at them in Dublin, so any rational person will take advantage of such a situation and grab a break at the seaside, negotiating a maze of back roads to do so. 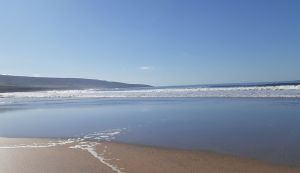 I am a rational person, so I took us out for a sunny day at a very nice beach. Which was good for our sanity. Saw one speed trap on the main drag before we made the turn for home. That was it.

Overall we’re all good. The sun is shining, the daffodils are coming into bloom, we’re currently having what I call a ‘false spring’ which is one of those interludes between patches of wintry weather. Nothing out of the ordinary, but it does help us cope with the news that these stupid, pointless and ineffective lockdowns are likely to continue into June. Yeah, right.

Anyway, Mrs S and I are okay. We have a sunny spot in the garden to take tea while farm work goes on all around. Colum’s dog barking at the Shetland Pony Colum bought recently to keep one of his thoroughbreds company. The pony wasn’t too happy at having an uppity dog think he was an over sized sheep and complained loudly. Colum’s sons chainsawing more wood while I restacked our own log store Canadian style. While things are quiet, the chores have to be done. We just get on with things, ignore all the panic mongering, although I did notice that the radio has switched from all doom, gloom and saccharine ‘stay safe’ propaganda to more hopeful stuff about some businesses that have not gone bankrupt in the last year being ‘allowed’ to re-open.

Unfortunately I’m not so hopeful. These lockdowns aren’t going to end until those deluded souls who support them get a sanity reboot. Not holding my breath for that to happen. Things have become too polarised. Everything is partisan political, and if you aren’t in lockstep, you are the bad guy. The politicians are talking about ‘wealth taxes’, which is just another way of passing the bill for their screw-ups onto John Q Taxpayer. No doubt the well connected will pay no more than the bare minimum while those of us who can only afford to buy one house get asset stripped.

So we’re all still at the mercy of this big government-created crisis as the economy implodes and everybody’s assets are bought up on the cheap by those crony capitalists who can afford clever lobbyists. A case in point being all those wealthy climate change promoters who buy large beachfront properties. Pardon me for noticing, but aren’t these expensive waterfront places supposed to be drowning in the next year or two? Like they were back when the ‘global warming’ bullshit first started in the late 80’s?

One item of note being the wholesale purchase of agricultural lands by some very wealthy people. Almost like they want to corner the food supply, isn’t it? Yet these are the very people who support ideas like the rest of us having to chow down on reconstituted Cockroach. These latter day Henry Ford’s seem to think because they have made a lot of money that makes them fit to tell everyone else how to live. I contend that the Davos Party or World Economic Foundation and suchlike are not fit to govern anybody because these organisations are made up of compulsive meddlers who are philosophically incapable of understanding the multiplicity of subtleties the average human individual is home to, like Ford was.

These techno-geeks think we’re all herd animals to be managed and culled on demand. We’re not, humans are a co-operative tribal apex predator. The sooner the WEF gets that memo and stops interfering, the happier everyone, including them, will be.

2 thoughts on “The Daffs are out”