When it comes to Christmas day, Mrs S and I can hardly be seen as traditional. Seeing as the county borders will be officially closed as of Sunday the 27th, we thought we’d do a little rescheduling while family can’t get to us, and elected to go out for a couple of mini road trips on the 25th and 26th.

No sense just hanging about the house, eating and drinking far too much, Mrs S and I decided; “Hang it all – let’s go touring.” So that is what we did. Up through Galway up to Mayo and Sligo and back on Christmas day. So I loaded up the picnic basket with sandwiches for lunch as we’d had our traditional Christmas dinner on Christmas Eve and a present opening via Zoom with the kids first thing. Once you get the hang of them, managing multiple time zones is a snip.

The weather was pretty grey and bleugh most of the time, but overall we had an interesting two trips. For example we were out in what is called ‘Joyces country‘ when the clouds lifted and gave us a view better than Glencoe, which in itself is pretty damn spectacular. On the second (Boxing day) we found ourselves in the grip of something the hand wavers call ‘Storm Velma’ (I think). Okay, it was a bit wet and windy on the coast of north Mayo, but the scenery there was still pretty as we scootled through Ballycroy National Park. Did think briefly about popping over onto Achill Island, but as visibility was less than a kilometre and the rain was having a damn good lash, we ate our sandwiches and drank tea in the safety of our little tin box south of Newport. After that we looped back home, the wheel kicking in my hands a little, but not enough to slow us down. It wasn’t that bad.

We’d already done the Burrens (See a couple of snaps below) on a previous trip, but what I can tell you chums is if you like your scenery in the raw, this is the place. 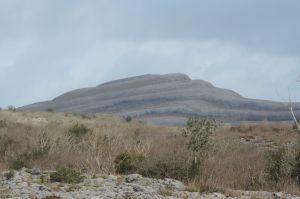 As you can see, on that day it was much nicer. A tad breezy and chilly, but brilliant sunshine.

As for the usual Christmas events and festivities I don’t generally fuss about them much, apart from organising the catering and stuff for Mrs S and stepkids. There is no turkey, there’s a joint of Pork for Sunday lunch today, cooked to my own recipe.

As for Christmas day itself, I had no presents to unwrap. I look at it this way, my friendship and love are given as I see fit and cannot be bought. They have no price. Well, certainly not less than a hundred thousand dollars, at which point I’m happy to open negotiations. But even then, parameters will be clearly defined in the resulting contracts.

Anyway, hope my last remaining reader had an interesting time too. Eat, drink and be merry, for tomorrow we certainly diet.

8 thoughts on “An alternative Christmas”

A Sarcastic Anglo-Canadian gentleman in Ireland, shouting into his own bucket.