Saw this on Pinterest today and it made perfect sense. These gross interferences in our human rights that Government is responsible for in the name of some perverse form of ‘safety’ fit the bill. COVID-19 / SARS/COV-2 is a dead horse. Not a ‘conspiracy theory’ but simple common sense.

Dr Mike Yeadon, ex head of Pfizer R & D surmises that the pandemic has been over for months because most of the population is now immune. The pandemic is over, as is the emergency. A simple test using the law of diminishing returns means this logically has to be the case. The disease has already done it’s worst with the vulnerable population.

Yet still various governments are talking about cancelling Christmas. I say to the politicians, put your hands up, admit it’s been a major over reaction and lift the restrictions. You will be forgiven if you are honest. However, that window is rapidly closing. Time to ‘fess up and play fair boys. All the talk of mandatory vaccinations is not a good idea as the worst has been past for ages. The pandemic is fizzling out as they all do. It’s running out of people to infect.

Small aside; in the grocery store around lunchtime I turned around to see a tall girl in her early 20’s standing waiting for her turn with the cashier. She was terrified. The look in the poor girls eyes was of full on rabbit in the headlight paralysing fear. Now I’m not that scary looking a person, and I don’t think her expression had anything to do with me. However, she was almost paralysed with fright, twitching at every little thing or if anyone came within six feet. As I left the store, I found myself wondering if she would be one of the first in line for vaccination and if the vaccine is not as safe as claimed, run the risk of health damaging side effects. For one so young at the very start of her adult life, that would be an unnecessary tragedy. Even so, the fear being pumped out at the vulnerable will have repercussions for years, not merely economically, but socially and emotionally, scarring a whole generation.

Quick statement of interest here; I normally have no problems with vaccinations. I’ve had the set, from TB, MMR, Polio, Diptheria and half a dozen others. And if I’m off anywhere where some nasty bug is endemic, normally roll my sleeve up with a grin. With one particular exception; Influenza. Historically on the three occasions I’ve actually submitted myself to a flu jab, I’ve always been ill for three or four days forty eight hours afterwards, so nowadays I tend to ignore all the wheedling from GP’s and Pharmacists to bare my arm. If forced to, I’ll take a discreet place at the extreme rear of the queue and go “Oh dear, what a shame. You’ve run out of vaccine? Well I’ll be off then. No need to fuss, you did your best. Byee…” And wait for the ones before me in the queue to fall over, or not, as the case may be. If experience teaches you that something is likely to make you ill, doesn’t it make sense to avoid it?

I’d also like to introduce anyone passing who reads this far down my febrile drivel to the ten commandments of logic. Always a handy list to have lying around. Just as a reminder for when the levels of media and political bullshit rise above waist level, like now. 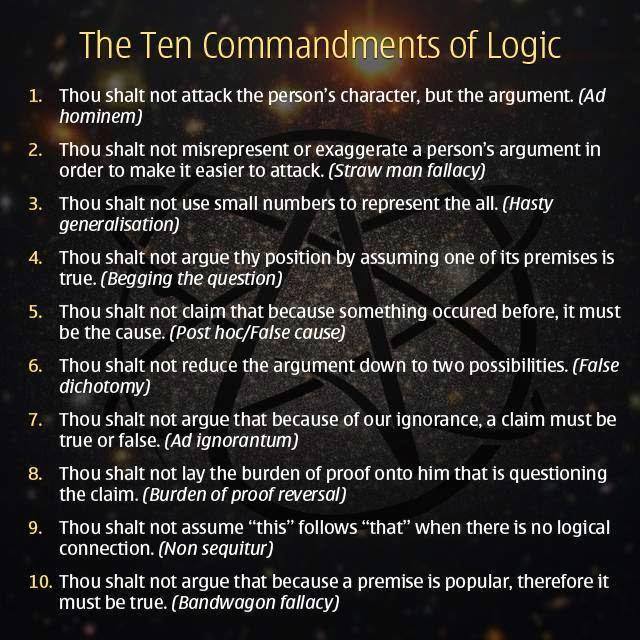 Update: Interesting reports coming out of Milan, Italy. Apparently patients in a lung cancer trial were found to test positive for SARS/COV-2 as early as September 2019. Now Mrs S and I suffered from a very strange bout of an influenza type illness I called ‘The London Cough‘ in November 2019. If the bug was active in Milan, in September 2019, it is not a massive conclusion jump to conclude that we may have already been infected and recovered. If this is true we’re already immune to the bug, not likely to catch it or pass it on and therefore do not need to self-isolate, or wear a mask. We are safe from the world, and the world is safe from us. Isn’t that nice?