In these depressing days when the world seems like it’s going to hell in the proverbial handcart. Where doomsters gleefully spread their misery on and offline, the rest of us try to get on with life as best we can with a little humour.

The best gag I saw this morning was about the latest high risk job, which I quite fancy having a go at myself if truth be told; rear gunner on a toilet paper (Andrex) delivery truck. Now where do I submit my CV? I’ll pay for my own body armour. 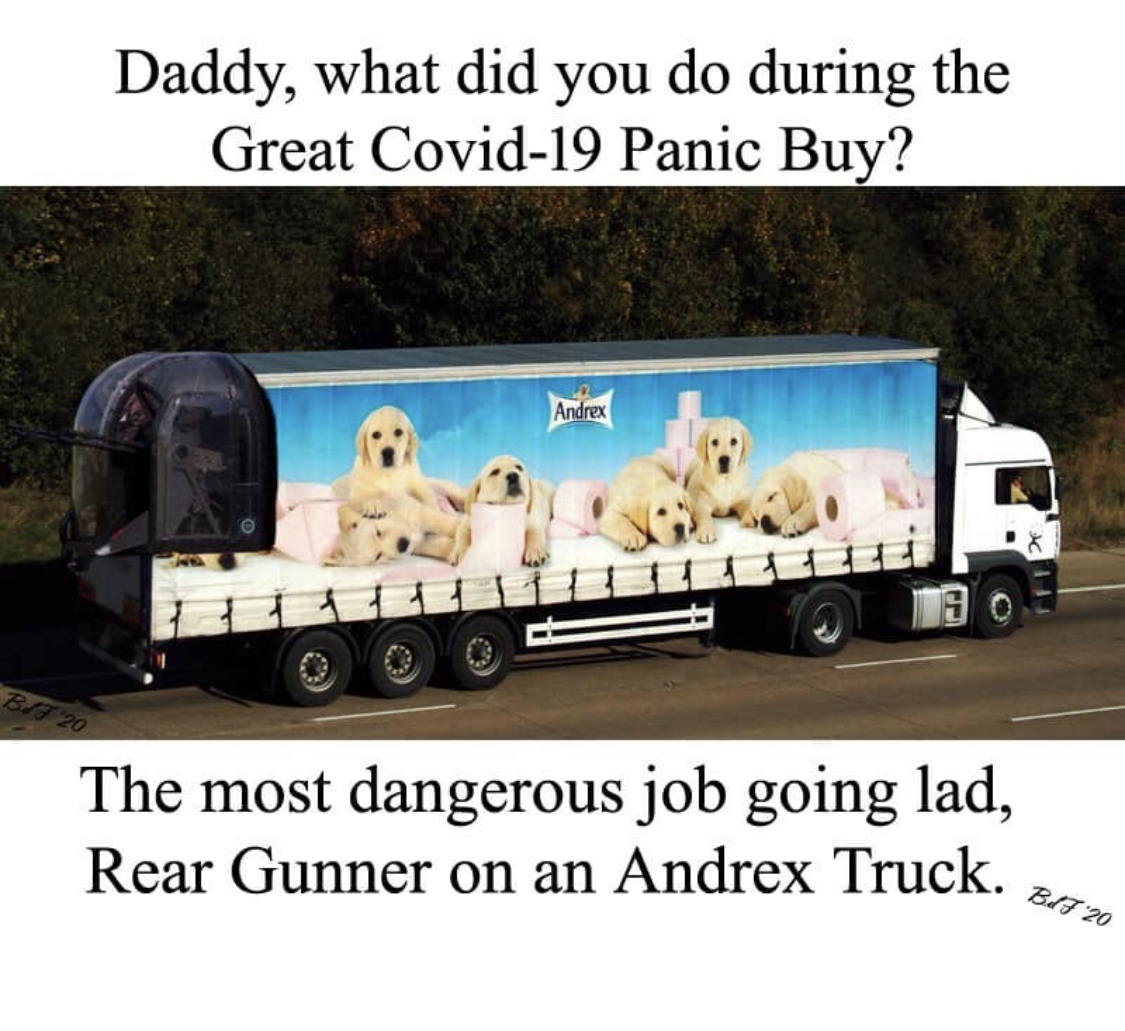 There’s also something I’d like to introduce my one remaining reader to; taken from the canon of the late, great Sir Terry Pratchett; the zombie socialist in the form of Reg Shoe. For the uninitiated, Reg starts life as an action socialist type who rather reminds me of the notorious Guardianista and lefty drama queen, Owen Jones. Always banging on about how things will be so much better ‘after the revolution’, then after dying (In ‘Night Watch’) is so fired up with his ideology that he becomes a zombie after being shot through with crossbow bolts. Which is how I view Owen Jones. Well, not shot through with crossbow bolts, but so dim that he doesn’t realise he’s flogging a zombie horse in the form of Socialism.

Anyway, it’s common knowledge that Socialism was dreamed up by a couple of rich kids (Marx and Engels) with well off parents and it seems the only socialists nowadays are similarly well off and privileged youth. They know little of those they call the working class.

This is where I see all these, what we used to call during my college days ‘Action Socialists’, latterly SJW’s. They are the people whose belief is so strong it won’t let go, even if it is only a warped parody of real life. The Reg Shoe’s (Undead yes! Unperson NO!) of this world. Doesn’t matter that their ideology has been tried and found wanting so many times at so great a cost, they are so busy virtue signalling in a vain attempt to achieve worth that they forget the best way to make a better world is by doing the grunt work of day to day living. They are the pigs of Orwell’s ‘Animal Farm’.

One a personal note, I’ve picked up a mild seasonal cold. Nothing much, just a little snottiness, catarrh and mild cough which is hardly noticeable by mid morning. It’s not Covid19. I’ll be fine in a day or two.

Covid19 is not the ‘Boomer remover’. Which is just plain insulting and inaccurate – only complete assholes could come up with such a meme. Covid19 is no respecter of age. Anyone with an underlying illness like Diabetes, any of the myriad genetic disorders, or a pre-existing illness automatically drops into the ‘High risk’ category. As does anyone who works in health care. Healthy 50-80 year olds (There are many such) likely will not die from this affliction. So there.

These are trying times. Just trying to find something to laugh at while living day to day is hard, but we should inject what levity we can into the desperately ill body of life. It isn’t a cure, but it does make the bad times more bearable.

Anyway, it’s a beautiful day outside, if a little brisk. So while I’m waiting for the powers that be to get their shit together, I’m going to wrap up warm and go outside to read.

At least my Lemon plants are doing well.

Important update: Might be a good idea to leave off non-essential NSAIDs and Steroids according to a French neurologist. See Dr Campbell’s video below.

Even more important update: One of my little Grapefruit plants has put out a tiny, pea sized pale yellow flower. Awww.