In Winnipeg this morning touring the ‘Canadian Museum of Human Rights‘ where I feel they were missing an exhibit. A small headstone inscribed thus; “Free speech in Canada. Killed by M103 and Bill C16 May 2017. Let ’em Bleed.” The last phrase in that epitaph being borrowed from our current PM’s daddy talking about the heavy crackdown on Quebec separatists back in 1970. Which reminds me somewhat of the ‘Troubles’ in Northern Ireland. It should be noted that junior is not a patch on daddykins. Although he’s quite capable of getting us into a similar mess.

I was quite intrigued to see the mass murderer Che Guevara lauded in said museum. Someone missed the memo there. Old Che was a nasty piece of work, more in the category of oppressor than oppressed. More Pol Pot than Mohandes K Ghandi. He may be a favourite on your student unions wall, but read up on what he and Castro really did to Cuba. Guevara ended up shot in Bolivia, which couldn’t have happened to a more deserving case. Castro garnered a fortune from the suffering of the Cubans under communism. Don’t believe me? Look it up. 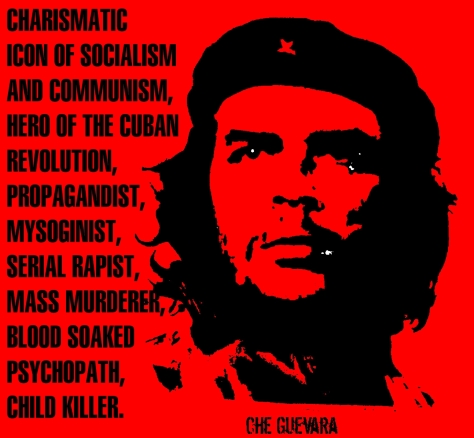 Yes, they included the Holodomor, the name given to the deliberate starvation of 7-12 million Ukrainians 1932-3 by Stalin, but the Holocaust or Shoah 1938-45 which is credited with around 6 million deaths gets way more shelf space. Maybe the Nazis had better press agents than the Communists. I don’t know. The slaughter of Poles in events like Katyn and various other bits of extreme WWII nastiness were omitted, maybe through lack of space. And if the museum had a section on the Rape of Nanking I must have missed it. Yet it’s not as though the museum is short of space. Space is what occupies it.

Overall the museum itself is an architectural masterpiece more inside than out. Beautiful open spaces lauding those historical figures who demonstrate the best part of humanity with the aforementioned exception scumbag Guevara. The garden of contemplation could have done with a few more Japanese elements in my opinion but generally served as a quiet place to stop and think about the general thrust of the exhibits. Mostly about the lack of books in the gift shop. Now for a museum of human rights I’d have stocked it with the works of every related volume on the law code of Hammurabi through Socrates, Aristotle and Cicero to Tom Paine and Bertrand Russell. Did we see anything but lip service to these noted thinkers? No. Just toys and the usual gift shop tat. So in that sense it left me a little underwhelmed and only served to cement some of my own thinking about the absolute need for freedom of expression as enshrined in article 18 of the fundamental declaration of human rights and in particular article 11 about the right to a fair trial, which is something lacking when it comes to the CHRC. Human rights, huh? Whose? For a country that purports to believe wholeheartedly in the rights of the individual, such a court of the star chamber should be a mark of shame.

After visiting the very top of the central tower for a quick dose of vertigo but splendid views of the city, we dodged out as the freak show (Pride week) next door got properly underway. The one thing that struck me was the majority of the attendees appeared young(ish) and predominantly female(ish). There were a few children there too. A few corporate sponsors cashing in on the Pink Dollar, well the more well-heeled attendees tend to have a high disposable income so why not?

Lots of bright colours and balloons like an attempt at a kind of poor persons Mardi Gras. Very festive. Although not the kind of thing I’ve ever been interested in. Doesn’t matter what I think about it anyway. They’ll all have died out in fifty years or so. Maybe these proclivities are natures way of editing the gene pool? Lots of unconsummated sexual activity means that those who don’t breed die out. Anyway, that’s all rather academic unless some form of politically mandated cloning comes about.

However, the one thing that really struck me about Winnipeg was the state of the roads within the city. Winnipeg is a beautiful city with much to commend it architecturally, fabulous green spaces, lots of trees, a superb foot bridge just across the way but when you get up close and personal it’s crumbling kerbs and poorly maintained city streets which tell the real story of low infrastructure investment of a city in real decline. Once we got back out onto Highway 1, we could see Federal money being spent on resurfacing the main highway, but inside the huge square ring road, the rot was obvious, like a tooth dying from the inside out.

Which is a shame.