That was fun, wasn’t it young Bill? All we needed was hail and a hurricane and we’ll have collected the set as far as weather is concerned on this trip. As you can see by the photo below we’ve been up above the snow line, watching the less prepared skid and swerve after powering past us on dry roads lower down. The chap in the picture below for example, was travelling on summer tyres and shortly after Mrs S took this picture shimmied into a left filter lane to let us past when the fog got too much for him. 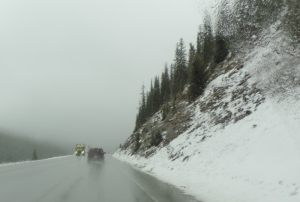 Then he cut in behind us as we caught up with an eighteen wheeler on the downgrade, only to vanish off the road a few minutes later, having already stirred my survival instincts with his mildly erratic steering. Did he lose the road completely or lose his nerve? No idea. All I know is that he was there one second and gone the next. The three pickups and cars behind us showed no signs of alarm, so I assume he swung off into one of the laybys on the other side of the road to catch his breath. The old US-50 through the mountains isn’t a road I’d like to travel in less than totally dry conditions on summer rubber. Anyway, I digress.

A week left. Wow. I keep getting asked by various people about what I, as a Canadian and expat Brit, think about the USA. To which the answer is a big “Don’t know”. Which sounds like a bit of a cop-out and maybe it is, but my sense of scale is still in complete overload. ‘What I think’ is not something I care to distil into a single sentence. I could of course cheat and resort to vague and cheesy adjectives like ‘fantastic’, ‘amazing’ and even ‘awesome’, but these would be highly misleading. The USA is too diverse, too big to sum up in this fashion. From desert to swamp, farmland to forest, from flood plain to salt flat. Oh yes, regarding Bonneville salt flats (Another one ticked off my bucket list), this is what the raceway looked like yesterday. 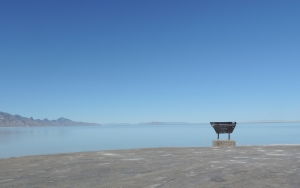 The bullet hole riddled black sign (I estimate at least 20 perforations, and another 30 bullet dents) in the lower right of the picture is at the end of the access road. After that the rest of the area, several square miles, are two to six inches deep in water. By the end of the month this water will be gone. Evaporated, just like every year. We didn’t take our sturdy little SUV out on the waterlogged flats, as the fee for getting towed out of the mud and salt should you get stuck, is a cool twelve hundred bucks US. I’m not sure if the towing companies take credit cards either. Anyway, the salt will all have dried out by early June, and the crust will be hard and smooth enough for race week and speed record attempts by the blistering head of mid July and August. I’d like to see that. Fly into Salt Lake, hire a car, park out at the rest area at mile 104 with a big sunshade and my 20×50 binoculars and watch the fun.

2 thoughts on “Above and below the snow line”

A Sarcastic Anglo-Canadian gentleman in Ireland, shouting into his own bucket.