Finished my studies and other work for today and took time out to pop over to Wattsupwiththat. A few minutes later Mrs S was knocking on my office door because I’d been laughing so hard.
“Bill, what’s happening?” She asked. By way of a reply I pointed at the screen. She paused, read, and then giggled mightily.

It turns out that some academic ‘green’ fantasist is trying to promote a return to collective manual labour and draught animals in farming as a solution to the non-problem of ‘global warming’. Well I’m sorry. I come from a long line of farmers and market gardeners and am calling this garbage out for the complete and utter ivory tower shite it is. I’m presuming that said Swede has never lived and worked on a farm that has no machinery to till the soil, or if he has, has only tried his theories out on a part time hobby farm for a couple of years at most. 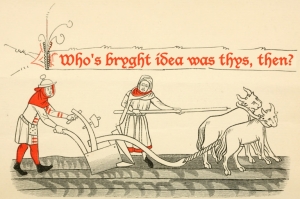 Well, excuuuse me! There’s only one reason for such a retrograde move, and that is blind necessity. I’ve worked and grown up around farms for much of my younger life throughout every season, and I’ll tell you this for free. The last thing anyone with two brain cells to rub together is to go back to doing things the hard way. Without mechanised assistance, farming is hard, very hard work, not that I’d expect a soft handed academic to have even the faintest idea of what it’s like to graft for at least nine solid hours six days a week shifting shit, planting, weeding, harvesting and getting ready to do the same thing all over again, year in, year out, regardless of the weather.

Being in the great outdoors may look like fun while the sun shines or the rain is light, but if like me you’ve spent a few (In my case three) years with a fork in your hands in all conditions where the sky is flinging it’s load hard and horizontal across a farmyard and that job has to be done today or it won’t get done at all. And if it doesn’t get done, well, no crop, and after that, no wages. My excuse was that I was working my way through college at the time, and it was a local job that meant I could finish work in time to drive into town for my evening class. So I shut up and pitched in. Not that there weren’t fun moments. Getting the livestock together for a vets inspection. You’d think a fit young two legged man could outrun a three legged lamb with an ulcerated shoulder wouldn’t you? Wrong! I’ve helped a goat down from a tree, other livestock (mostly sheep) stuck in mud, herded sheep and cows, lost more than one Wellington boot (always the left one, oddly enough) in deep piles of cacky, and developed a sense of smell that can distinguish between numerous types of shit. I think said boots will still be there centuries from now until some latter day Time Team dig them up. “Arh, that be one of they 20th century foot garb.” An expert will opine. “Oi got this theory that in the 20th century they left these as offerins to some pagan goddess of shite.” That’s my best Phil Harding impression.

In cold weather, the boss usually got to ride in the relative shelter of the tractor cab when yardwork had to be done. The rest of us insulated ourselves against the elements as best we could. On one memorable occasion when the snow hit, I was swaddled in a waxed coat, gamekeepers gilet, two sweaters, two pairs of jeans, long underwear, two pairs of thermal socks and heavy boots. The wind cut through all of that, and after two hours I was quite drenched. By the end of the day my toes and fingers were numb, and when I got home the pain as my near frozen extremities thawed, was quite incredible.

My point is that really living such a life puts calluses on your hands and heels, turns the skin of your hands into leather and in Summer gives you a ‘farmers tan’ deep enough to pass for an ethnic minority in poor light. Notwithstanding all the constant little aches and pains from bone and cartilage damage due to prolonged physical labour in later life (Around 40). Hard agricultural work is neither for the faint hearted or the less than robust.

Not as though people like Andreas Malm, Naomi Klein, would ever sully their hands with such honest labour. That’s only for the little people….

4 thoughts on “Facts and fantasies”