Today I have the signing of forms. Legal matters in the UK require my notarised signatures, so off I went to the local Notary Public to get my drunken spider crawl witnessed and stamped. Such are the occasional inconveniences of being an Expat. That and having wills in multiple jurisdictions. Not to mention the extortion that Canada post tries to apply while delivering a distinctly third rate overseas service. I’ve all but given up expecting Air Mail to be delivered within 4 to 7 working days. From Canada it’s more like three bloody weeks. So in future I’ll be sending important post UPS or Fedex. They’re actually cheaper would you believe? And they do express post to places Canada Post seems unable to reach.

Of such is the coarse cloth of my lack of amusement cut. Still, I stand to make a pretty penny, so I shouldn’t bitch. I just wish I didn’t have to send hard copies via an insecure means because of companies whose business models haven’t quite made it into the 21st century. Why my Bank and Lawyers won’t accept a fax or have a secure portal I can update my records on is a source of all too frequent irritation. Every time I have to authorise changes, with legal costs and postage we’re talking about a hundred and ten dollars, which is about fifty five quid a pop at the time of writing. That’s a hell of a lot to have your signature witnessed and to send ten sheets of paper. I don’t care how ‘carbon friendly’ the service is.

Anyway. While browsing the pilots forums at PPRUNE.org, I see the desperation about so called ‘man made climate change’ has sunk to a new low. At least according to the propaganda machine called the BBC. Apparently it’s supposed to make transatlantic flights longer, although the mechanism detailed in both the article and study looks like some sort of doomsday fantasy, which is what the lamestream keep feeding us. Yay! Wreck your economy and doom your descendants to penury over ‘science’ that would even make a Fourteenth century alchemist go “Carbon Dioxide? Really? Pass that philosophers stone will you and bugger off, I’ve got to transmute this lead into gold by next week or I get shortened by ten inches. Monarchies, eh?”

Well just let me pull my worn and tattered scepticism out of the drawer, yet again. The models this ‘science’ is based on makes Piltdown Man and Phlogiston look like cutting edge. None of these carbon dioxide driven climate models has ever made an accurate prediction three days ahead, let alone a century. So isn’t it about time they were consigned to the junk pile of failed theories? Like the flat Earth, Earth centred astronomical model, celestial spheres and Angels dancing on pinheads? The climate changes, and if you listen to people who are thinking outside the CO2 box, you start to get the idea that the Earth’s Atmosphere in no way resembles a greenhouse (Lack of glass, no frames or doors), and that a trace gas which is essential to photosynthesis could be a whole lot higher and actually improve the biosphere of dear old mother Earth. Cut the level of CO2 below 150ppm, and photosynthesis stops. The plants die and so do we. We need more CO2, not less. The whole ‘back radiation’ thing is an assumption based on the work of 19th century Swedish researcher Svante Arrhenius, whose equations assume straight line values for temperature response. Which is fine, to a point.

However, anyone who has studied meteorology in any depth, like those whose livelihoods are shaped by atmospheric physics, for example pilots, will understand that there is nothing straight about nature. A few years decades ago, when I was much younger and flush with funds, I had an ambition to learn to fly. Part of this entailed taking lessons how to fly gliders, light aircraft and even on two wonderful occasions in a helicopter (Once as navigator, once hands-on). Necessary background study gave me a rough working knowledge of atmospheric physics, airflows over laminar surfaces, cloud formation, air currents, the Jet stream, Anabatic and Katabatic winds etcetera. In short, what causes your tiny airframe to be lifted and tossed around by outside forces and how not to die when it is. Wish I’d kept my log book, now lost in multiple house moves, up to date. But that’s by the by.

What my studies have taught me is that Nature is curly. Things have limits. The speed of sound is a good one. Flying faster than sound requires much more complicated mathematics than simple straight line equations. Supersonic pressure wave build up is not a straight line response. Likewise, the speed of sound is not an absolute, it’s a variable which changes with pressure, density and temperature. Likewise, the IR absorption of Carbon Dioxide does not follow a straight line or even, as some have claimed, an exponential relationship with proportion. Any increase of temperature down to CO2 drops off rapidly after 20ppm.

Wait a moment. Twenty parts per million, but our atmospere contains around four hundred now? WTF? If it was an exponential relationship, shouldn’t we be baking in a Venus-like hell already? Apparently not. 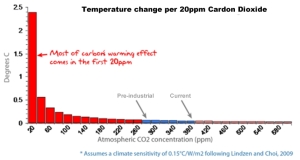 H/T to Jo Nova for the original graph based on the work of Lindzen and Choi, 2009. So all this stuff about CO2 being a major climate driver doesn’t look so solid when you take a long, cool look at the real information.

So why is CO2 even an issue? Possibly because there are a lot of people with money tied up in Carbon derivatives, and politicians who have already spent all your tax dollars and need an excuse to raise even more taxes, who would like us all to think otherwise. So a number of very able Public Relations specialists are paid to keep the issue on the boil, brain dead media luvvies who leech off the whole apocalyptic drama of the thing, protestalot ‘climate’ activists who get back door funding from rich donors, and the politico’s making sure that grant money is directed to those who are (unsuccessfully) trying to prove that CO2 is the big climate bogeyman come to murder us all in our beds. Notwithstanding the ‘groupthink’ by the underinformed and credulous. If it wasn’t for the constant demands with menaces, I could laugh at these people a whole lot more.

4 thoughts on “Today’s lack of amusement”