Mrs S and I have just finished compiling our tax returns for the Canadian tax man. The file has just been fired off to our accountants who will cut and paste the figures into our online tax forms. They will send us a bill, which we have put money by to pay, and then we’ll cough up. Relatively painless, and as long as you’re honest, they don’t bother you much.

Unlike the UK where HMRC think every cash transaction is ‘cheating’ the tax man, to which my response is a curt “Who earned the fucking money in the first place, sunshine?” Now I do not mind paying a reasonable tax burden, but what HMRC and their political masters have forgotten is that it wasn’t their money to start with, and they owe the taxpayer a duty of care not to piss public funds up the wall.

Picked up from the Angry Exile via The Filthy Engineer, this propaganda bowel motion of silliness from the Grauniad entitled “How European are you?”. Having taken the quiz, I wasn’t completely convinced by the result, and so did a screen grab to make a couple of amateurish but philosophically accurate corrections without changing the overall feel of the thing. 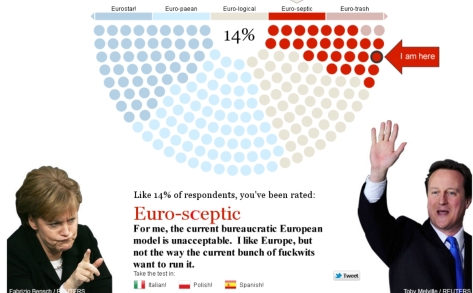 The one thing I find so totally offensive about the original, and highly ineffectual, version is that taxpayers money was probably used to fund its creation.

Despite not making much time to blog nowadays, I still do the rounds of the others on my blogroll to see what they’re up to. Far more telling than the same tired old output of the mainstream. Even the dear old Tellytubbygraph has devolved to the level of a comic. Who are they hiring for sub editors nowadays? The Incontinent and Grauniad still call all those daring to question the dogma of Man Made Climate Change / Disruption ‘Deniers’ when the only people in denial are palpably those who still believe against all the evidence that minor changes in atmospheric trace gases can catastrophically alter the global climate. If the emails released under ‘Climategates 1 & 2’ are any guide, the very people responsible for finding evidence for catastrophic man made climate change are having trouble with it too.

This side of the continent I keep on hearing rumours about new bouts of ‘Quantitative easing’ which are simply a device to devalue a currency of a country deeply in debt, and so supposedly reduce the level of indebtedness. So if a foreign country owns thus many billions of debt in the form of government bonds, with every bout of QE, or devaluation, that debt, or burden of borrowing becomes less. Yes, fine, it devalues the debt, but doesn’t address the core problem which is for the politicians to stop spending so much on non productive areas.

Say for example if bins need emptying, then how many administrative staff does a local authority need apart from the bin men (Who are mostly employed by contractors)? If I may be permitted a non-PC observation, there appears to be a long standing Chief / Indian imbalance in UK public services. If streets need patrolling by enforcement officers of whatever stripe, then surely two uniformed feet on the street are worth four times one office bound head up the arse? Far cheaper to boot (or boots).

Also the continuing assault on civil liberties by various mendacious lobby groups. Has that changed? Not really. Now there’s an area ripe for spending cuts.

Michael Buerk asks inconvenient questions regarding the wild claims of the pro Man Made Climate Alarmist faction. Whilst he does say that he believes that humanity is altering the climate, he’s also asking where all the doom and disasters are that have been so authoritatively predicted. That’s an excellent question. where are they?

To quote a Monty Python sketch; “Can I just say that’s the last time he’s appearing on Television?”

Glad to see scales falling from eyes. Interesting blog too.

I think they can go on the blogroll,as Buerk seems to cover some Libertarian subjects.

Having worked over most of the festering season, I’m heartily glad it’s all over and I can visit to the January sales replete with the knowledge that I don’t have to max out my credit cards to buy a brand new slaptop. Been a profitable Crimbo as far as I’m concerned. Lots of Clovertime and an inflated post foetid season paycheck to follow. January looks as though there’s more of the same on its way, which you won’t hear me bitching and kvetching about.

I mean, come on. Why spend the best part of two weeks off when you can coin it covering for people making themselves unhappy? I’ve always had misgivings about Christmas, and on the whole prefer to take my time off when the weather is warmer and I don’t have to trip over other peoples’ spoiled brats and unhappy spouses. There’s also the issue of not being squeezed for every last dime for taking a break during School holidays, as they’re always the most expensive.

A Sarcastic gentleman in Ireland.

Stalkers of taste and discretion